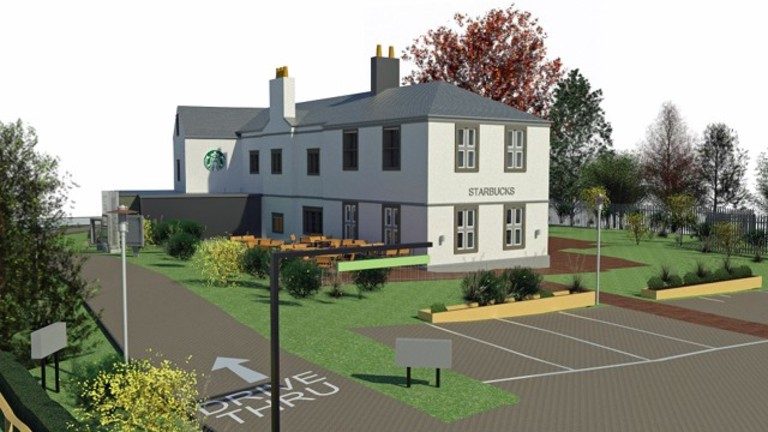 Carbrook Hall transformed into Starbucks drive-thru by Self in Sheffield

Planning permission has been given to transform the historic Carbrook Hall pub, Sheffield, into a Starbucks drive-thru and coffeehouse.

The Grade II listed pub in Attercliffe is one of the city’s most historic buildings, dating back to 1176. During the Civil War it was owned by leading Parliamentarian Thomas Bright and used as a meeting place during the siege of Sheffield Castle. It has also been described as one of Yorkshire’s most haunted buildings with reports of mischievous spirits throwing bottles around and ghostly apparitions in the toilet mirrors.

The Carbrook Hall has been closed since February after being sold by Punch Taverns to West Street Leisure (WSL). Its future was in doubt after an arson attack on the site in May when the building was registered by Sheffield City Council as an asset of community value.

But, planners have now green lighted a proposal on behalf of WSL for a 60-seat Starbucks coffeehouse and drive-thru development. The scheme, which would create 15 full-time and 20 part-time jobs, has been designed by Self. Director Martyn Smith said:

“The project involves knocking down some single-storey extensions to the building and the creation of a drive-thru on one of the side elevations of the listed section.

But, the listed section, including the 17th Century Oak Room with its fabulous wood panelling and ornate ceiling and fireplaces is all being retained and restored without any structural changes.

It should be a unique Starbucks and it’s great that such an historic city building is being brought back to life and will continue to be of real community value as a meeting place for people of all ages.”

Renovation work, which is being funded by WSL, can now start and Director Sean Fogg said:

“It was very difficult, because of the investment needed and its listed status, to see how this remarkable, history-rich building was going to be saved.

But Carbrook Hall is in a fantastic location in a really bustling commercial, manufacturing and retail part of the city and I think it’s great that Starbucks have seen its potential and we will be able to restore one of Sheffield’s most iconic buildings to its former glory for the benefit of all.”